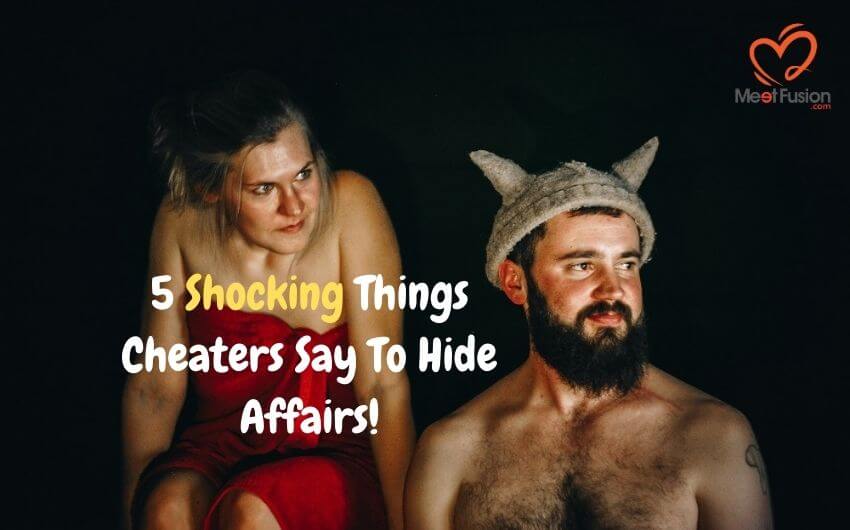 Not everyone who is married will admit it, but you would be surprised at the percentages of married people who have cheated at least once during the relationship here you will find the most common things cheaters say to hide affairs.

Since most of these results come from research or word-of-mouth, there is a big chance that their partners are unaware of it ever happening. Has this freaked you out yet? There is probably no need to panic, it is always good to know what kind of cheating behavior to look out for to catch someone red-handed.

What is considered cheating in a relationship?

Cheating is the breaking of a promise with someone (boyfriend, girlfriend, wife, husband, and partner) by kissing, having sex, or being romantically involved with someone else. Of course, if you are in an open relationship or if you have discussed the matter with your significant other, this doesn’t really apply to you.

Is cheating a behavior?

Cheating in itself can become a pattern and a part of a behavior. Infidelity often stems from other underlying issues such as low self-esteem, self-destructive thoughts, or adrenaline-seeking thoughts. Nevertheless, all of these thoughts and actions can form together into a patterned behavior.

Keep in mind that not every person who says these things is necessarily a cheater, it is just common ‘nicknames for cheaters’ to use to cover their tracks.

I Will Be Working Late Every Friday From Now On

Working late only one day in the week, every week? As normal as it might sound, it also isn’t. It might be worth looking into, not in the sense that you need to turn into a detective and follow your partner everywhere they go, but just double check that they really are at work.

I Went For a Guys/Girls Night

Is this common for them to do? If yes, are they having a guy’s/girls night VERY often? These are signs to look for and indications that they might be up to something else.

I Met With an Old Friend

This is a very common occurrence, but do you know who this friend is? Have they mentioned them before? Do they want to say anything about this old friend? If not, it might be an alarm bell.

I‘m Going Away for the Weekend (with friends, work, by themselves)

Again, if this is something they normally do, it might just be part of their personality. If this hardly ever happens and is rare, and they don’t give you enough details about it, it will be a bit fishy.

Why Don’t You Trust Me?

Ah, the famous guilt-tripping. You might ask them to have a look through their phone and you will get this sentence as a response. Naturally, you will start to questions why you asked this in the first place, because of course you love and trust your partner, but think about it a little more before backing away from it.

As awful as it might sound, cheating in a relationship can definitely boost self-satisfaction. It is very likely that cheaters will feel guilty afterwards, but their guilt won’t be bigger than the satisfaction they get.

How to save your marriage when you feel Hopeless

A common initial reaction is to actually blame you for confronting them about cheating. They will want to make YOU seem like the one that is out of line by making you think you are being crazy, paranoid, insane, etc.

I Actually Haven’t Been Happy In A Long Time

They might say this to make themselves look like the victim. The funny thing is, they will say this out of the blue whilst acting all lovey-dovey up until this exact moment. Enough reasons to know this is not the case.

It Didn’t Mean Anything

As if that it meant to justify their actions. It almost sounds like they are allowed to do it if it doesn’t mean anything to them, but what about what it means to you?

But I Love You

Another form of pressuring you into guilt. As much as you probably love them, and they (maybe) love you too, it doesn’t dismiss their actions.

Commonly Asked Questions About cheating in a relationship (FAQ)

What does cheating do to a relationship?

Cheating can seriously harm a relationship. If a couple doesn’t break up after this, there will be trust issues and paranoia coming from the side that has been cheated on, and there might be a part of them that will never forgive their partne

Can you ever forgive a cheating partner?

Even though it is extremely hard, it is definitely possible. It depends entirely on the person that was cheated on whether they want to forgive the cheater, some might argue that a cheater never changes, but others are willing to give it a second try.

Should I forgive my partner for cheating

Believe it or not, but forgiving your partner for cheating will do you more good than them. The anger that you hold inside yourself will be let go, and there will be a weight lifted off of your shoulders. Of course, you should only do this if you feel you are ready for it.

How long does it take to forgive a cheating boyfriend

Is he really sorry for cheating (cheating guilt signs)

Even though they are not really allowed to, cheaters feel bad too. Some guilt signs include the following:

Cheating is something that happens more than we think, whether it is admitted or not. There are enough Warning Signs husband is cheating to look out for, and even though in most cases these scenarios are normal occurrences with perfectly normal explanations, it is better to save yourself from finding out too late, or never. If you or someone close to you is having doubts, there is no harm in double checking things for your own peace.