15 Signs Your Marriage Will End in Divorce (Revealed!) 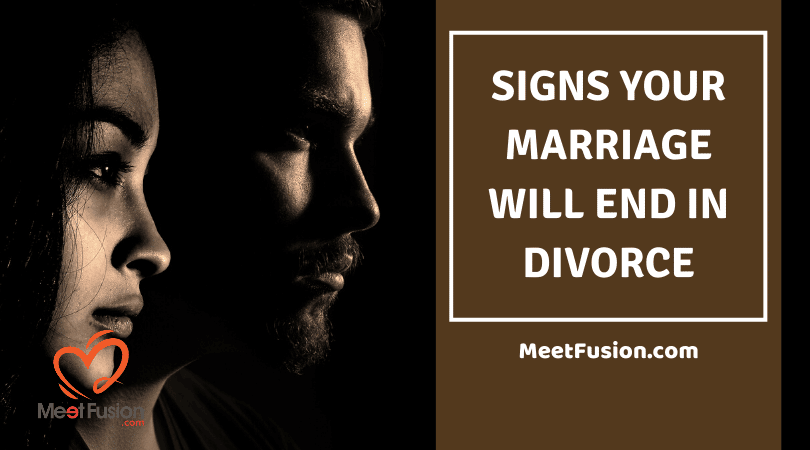 As common as divorce has become nowadays, it rarely comes as a complete shock to partners. More often than not, the relationship has been deteriorating steadily over time. By the time the partners engage a divorce lawyer, the separation has been a long time coming with some Signs Your Marriage Will End in Divorce.

Signs Your Marriage Is Headed For Divorce

According to the American Psychological Association (APA), between 20% and 40% of divorces in America happen as a result of infidelity. There are lots of reasons which have been put forward to explain why it is so common.

Even then, many marriages have survived after infidelity. Cheating can be forgiven. If it happens once or twice and the couple is willing to move past it, they can put it behind them and have a happy marriage.

However, for this to happen, the partner who cheated must be genuinely remorseful. They must commit to let go of the extramarital relationship and focus solely on their partner.

They must vow to stay true to their partner from then henceforth. If the partner who cheated is not remorseful and continues to maintain the extramarital relationship even after committing to end it, divorce is on the horizon.

Difference between remorse and guilt. If a relationship is going to survive infidelity, the cheating partner must be genuinely remorseful and not just guilty. What is the difference?

Guilt is more about the offender than the offended partner. They feel bad for what they did but that’s about it. It is a valid emotion but it is not enough to rebuild the relationship.

Remorse, on the other hand, is a deeper emotion. It includes regret and automatically comes with a promise not to go down that road again. A remorseful person acknowledges how their actions hurt their partner.

Put simply, remorse says ‘I hurt you, please forgive me.’ Guilt says ‘stop making me feel guilty for what I did.’

8. The Thought of Your Partner with Someone Else Doesn’t Bother You

It is normal and quite in order to be filled with anger, hurt and jealousy at the thought of your partner with someone else. It shows that you care. You want them for yourself.

In some marriages, one partner is not hurt by the idea of their spouse with someone else. When this happens, you genuinely love your partner and want the best for them but are not in love with them.

You want them to be happy. If that means being with someone besides you, it is fine with you.

There is a difference between sharing your life with someone and merely living under the same roof. This kind of indifference shows that the partner mentally checked out of the relationship a long time ago.

They are no longer emotionally invested.

9. One or Both Partners Have Given Up

All marriages have their ups and downs. Sometimes the lows last for weeks, sometimes months. No matter how low the low times are, each partner lives with a sense of hope that the dark cloud is just that… a passing cloud.

It will come to an end and the relationship will be great again. Simply put, there is always hope for a better day.

You know your marriage is head for divorce when one or both of you no longer harbor any hope of the relationship getting better. When this happens there is little chance that the marriage can be salvaged.

They say that no problem in a relationship is unresolvable. There is truth in that but every resolution takes continuous conversation. It takes lengthy discussions where each partner speaks their heart and the other listens and takes these words into consideration.

If one partner is unwilling to talk or listen, it shows that they are no longer willing to make any effort. One person’s effort, no matter how great cannot save a relationship.

In some instances, the partner who has given up may not necessarily be quiet. They may listen to their partner’s suggestions of ways to solve problems but every solution suggested is put down. It is dismissed as impossible.

This is when one partner holds accounts or stashes of money, possesses credit cards, incurs debt or spends large amounts of money without the knowledge of their partner.

While you would not be expected to consult with your partner for every dime you spend, it is expected that the two of you be on the same page in regard to family finances.

It is more common than we think.

Few studies have been done on this issue but those that have been carried out indicate that as many as 41% of couples in America have or have had some form of financial infidelity in their marriage.

Although it is not a new concept, our parents and grandparents grappled with it, byt technology today makes it easier. You can sign up for accounts, make deposits and withdrawals and make purchases for just about anything from your computer. Nothing shows up in the mail.  A cellphone is sufficient to do a lot of damage.

Every couple would define financial infidelity differently. Is it based on the amount of money spent? Is the focus more on basic openness rather than amounts? Perhaps for others, it has to do with the implications. A huge debt, for instance, will have a significant impact on family finances.

In cases where one of the partners doesn’t have a predictable, steady income, financial infidelity could come in the form of undeclared incomes or under-declared incomes. Lying about unpaid bills is another form of money cheating.

Whichever way you choose to define it, there are some telltale signs which should raise your eyebrows. When in isolation they are probably nothing to think twice about. If you notice a combination of a few of these, it is time to ask a few questions.

Salvaging a Marriage on the Brink of Divorce

Like mentioned earlier, no marital problem is unresolvable. As long as the two partners are willing to talk about it and find a workable solution, there is hope.

Here are a few expert tips on how to climb back up from the edge of the cliff.

Consider professional marriage counseling.  Bring in a professional mediator. An outside eye and ear will be able to see things objectively and help you see them as such.

Many men would rather die than see a counselor because they believe they will be attacked. That is not the case. Counselors are trained to be objective and make sure that both partners are heard. A counselor can easily identify weaknesses in communication and help you find ways to communicate better.

See the world from your partner’s point of view. The proverbial expression here is to ‘walk a mile in their shoes.’ After the anger has died down, try to put yourself in your partner’s place.

There are many more signs that a marriage is failing. These are just a few of them. The most common issues which every marriage counselor opens their speech with are communication, finances, and infidelity.

Others include emotional detachment and addictions.

If you have observed any of these signs in your marriage, all is not lost. Let them serve as a warning for you and your partner to work things out rather than a prophecy of doom for the marriage.

7 thoughts on “15 Signs Your Marriage Will End in Divorce (Revealed!)”