How to start a conversation with a girl on Facebook 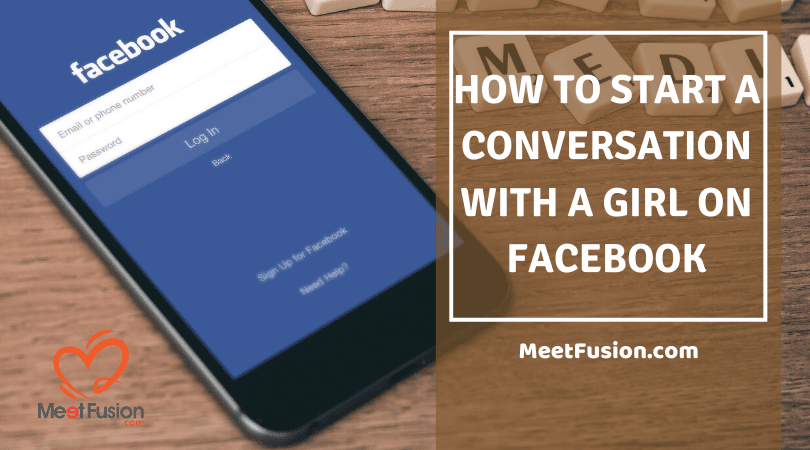 It used to sound strange that you met a girl online, and years later, you’re married and settled. Nowadays, that’s quite the norm, but it doesn’t mean that how to go about it has gotten easier.

The idea of starting a conversation with a girl on Facebook sounds quite easy for the unknowing person. A “hi!” would perhaps be what they start with. However, it is no surprise when the only activity they get on the other end is “seen.” Why is that?

What guys tend to forget is that if you’re looking to slide into a girl’s Facebook, there are a ton of other guys who are doing the same. Therefore, your simple greeting will not do much to get her attention.

If anything, that message can remain unopened for years. Simply put, if you’ve tried chatting a girl up on Facebook and it has borne no fruits, then you’re doing something wrong. Don’t worry about it; we’re here to help.

In this article, we’ll look at various ways in which you can start a conversation with a girl you’re interested in online. It is not 100 percent guaranteed that the tips will get you to what you want, so remember, were you can, play it by ear.

How to start a conversation with a girl on Facebook

1. Message her before sending a friend request

If she’s picky about the friends she makes on Facebook, then your friend request will likely gather dust or get ignored. That’s especially the case if you don’t have friends on common or share too few friends.

She might think that you’re a spam profile or just one more creep out to disturb her. Reaching out to her lets her know that you exist, and you’re real. After she responds, you can send a request, and she’ll be on the lookout for it.

Whether or not you’ve had in interaction before, she might understand when you let her know that you’re feeling awkward about reaching out to her.

You can also apologize for being a bother but also make it clear that you thought she’d be someone you want to talk to.

Being honest about the potential weirdness of texting her out of the blue will likely get you a better response. It signals to her that she was worth your moving past your feelings of anxiety to talk to her. Additionally, it is a shift from the creepy “hey sexy” messages she’s been getting from random dudes.

A way to increase the likelihood of a response is by asking a question. The reason for that is statements rarely get a conversation started. You don’t want to be too direct, though; your first questions shouldn’t be if she can go on a date with you.

An ideal place to start is on content she’d shared on her timeline. Ask for more context, or make a comment about it and then follow up with a question. Maintain a neutral language to keep her at ease.

4. Bring up someone you have in common

Common friends are also something you could talk about to her. If you notice that you have common friends from a particular social circle, then you can reach out and ask how she knows them.

Don’t sound too interrogative; make it seem as though you’re curious that you’ve never seen her. You can share bits of anecdotes to show how well you know the mutual friends to put her at ease.

When things go right, you’ll have a lot to talk about.

5. Talk about things you have in common

If you’ve noticed she likes a particular band or went for a specific concert, you can make that the topic of conversation. To her, it shows you’re interested not merely in how her photo looks but what she’s into.

She’ll be more likely to be open with you and go on about things you have in common. Since it is a sector you’re knowledgeable in, you’ll also find that conversation will be flowing. That does a lot to ease any nervousness you might feel.

Compliments tend to be a grey area, and they entirely depend on the girl you’re talking to. If you go straight into the praise, then they’ll register you merely want a hookup. Also, how you word the compliment matters.

Using the generic words such as ‘beautiful,’ ‘hot’ and ‘sexy’ will at most get you a flat “Thanks,” and then the conversation will come to an abrupt halt.

Why? There likely are other men in her inbox telling her the same thing. You want to use more unique words such as “fantastic” or “awesome” or something similar.

If you can use it to talk about her personality or character, then it’s a safe compliment to give. Also, avoid overdoing the compliments as it comes out a bit too flirty.

A deep dive into her profile will let you know what kind of personality she has. Memes would imply she’s humorous. Clips on social justice mean she’s passionate about humanity. Don’t box her into a category, but aim to have a similar feeling when you talk to her.

People tend to feel more comfortable with those who are similar to them. Remember to do a bit of stalking on her profile; otherwise, your conversations will be disjointed because you’ll talk a direction she’s not interested in.

8. Use complete words and emojis

“Ur,” “wat,” and such terms are something that you should avoid altogether. It implies that you’re immature and also questions your literacy. You want to show that you’re taking the time both to type and can have a meaningful conversation when you use proper English.

The occasional “lol” and “hahaha” is allowed, but even then, use them sparingly. You can also use emojis, but only when you’re not sure if she’ll understand the context. A smiley face could imply that you’re lighthearted, while a confused emoji may communicate that you need clarification on something.

Your initial conversation ought to be straightforward. Don’t start with a long paragraph about why you’re in her inbox. Start short and end with a question that allows her to answer.

It’s best to keep things bite-size until you notice that she wants to talk more. The other reason to keep it short is you don’t want her to feel bombarded on your first contact.

Things to keep in mind

Though these are some fantastic tips to follow, we cannot guarantee that they have a 100 percent success rate.

There are too many factors at play that even you cannot predict. She might see your message but gets swamped with work. Maybe she has a jealous boyfriend that is always stalking her, or she’s too shy and can’t believe that you’d want to talk to her.

A lot of men don’t seem to get that, and they end up attacking women who don’t show interest in them. Everyone is entitled to their preferences, so don’t be that guy.

If you send her a message once and she doesn’t respond, try a second time while still being polite. You can also add that you respect her decision if she doesn’t choose to respond. Should you get no reply, then do what you’ve promised and left her alone.

The art of starting a conversation with a girl of Facebook has to do with you being a gentleman. Too many men are thirsting over girls’ photos online and sending them inappropriate messages. Sure, a lot of them want a hookup but that is not how to go about it.

If you’ve successfully started and continued a conversation with her, good for you.

If it goes offline and you meet up, even better. In case you end up getting close, hooking up, or anything of the sort, don’t go putting her business out of Facebook unless you have her consent.

Her privacy is as important as yours, and you ought to respect it and keep it at that.

Unlock the secrets of the law of attraction using the language of desire.

The social media age has changed how we interact with people and, more so, how relationships start.

Love stories that begin with “we met online” are now commonplace, and so it’s not strange that you’d want to start a conversation with a girl on Facebook. It is about shooting your shot and hoping to get the girl you’re looking for. As you go about it, use an approach that your grandmother would be proud of.